How Unpredictable is the Alice Analysis?

Over the last year, several Federal Circuit judges have filed opinions lamenting the state of the case law that interprets the abstract idea exception to patent eligibility under 35 U.S.C. § 101.  For example, Judge Linn wrote in Smart Systems that the “problem” with the Supreme Court’s test “is that it is indeterminate.”[i]  Similarly, Judge Plager wrote in Interval Licensing that the “incoherent body of doctrine” applying Alice makes it “near impossible to know with any certainty whether the invention is or is not patent eligible.”[ii]  Many practitioners agree that § 101 decisions are difficult to predict and the state of the case law exacerbates this difficulty.  This article considers affirmance data to explore whether it supports the premise that § 101 decisions are not just difficult but fundamentally “indeterminate” or “near impossible” to resolve.

One set of data shows the Federal Circuit’s affirmance rate in appeals involving § 101, as compared to patent appeals in general.  Much of this data comes from a recent law review article by Paul R. Gugliuzza and Mark A. Lemley.  (Judge Plager cited a footnote from the article in his Interval Licensing opinion but did not address the article’s empirical data.[iii])  Another set of data shows affirmance rates in ex parte patent appeals before the Patent Trial and Appeal Board (“PTAB”).  This data comes from Juristat’s online patent analytics tool.[iv]

The likelihood of affirmance on appeal is a narrow but useful measure of predictability.  Judge Plager’s Interval Licensing opinion seems to recognize the importance of this metric.  For example, his opinion argues that the abstract-idea doctrine “falls short in the sense of providing a trial judge with confidence that the judgment will be understood by the judges who come after”—i.e., the appellate judges who “have the final say in the matter.”[v]

Those who are skeptical of § 101 decisions might argue that their high affirmance rate is a result of their indeterminate nature, not their predictability.  After all, if a question has no objectively correct answer that can be articulated as a rationale for reversal, an appellate judge may be more likely to let the lower court decision stand.  In practice, however, this argument is implausible.  Even Judge Linn and Judge Plager, in their opinions criticizing § 101, stated that they were bound by precedent to concur as to the invalidity of at least some claims.[vii]  These judges’ conclusions that precedent dictated specific outcomes—outcomes that both judges wished to avoid, in fact—undermines the notion that the § 101 analysis cannot yield definitive answers.[viii] 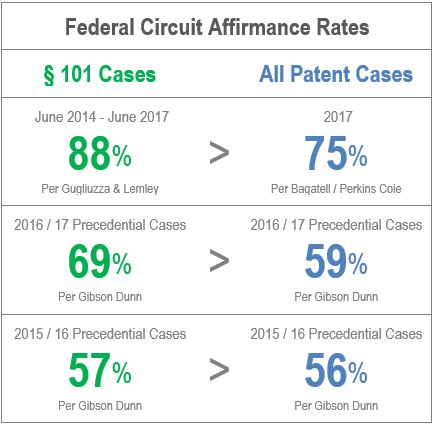 Additional data on the predictability of § 101 decisions is available in the context of PTAB appeals.  These appeals arise from examiners’ rejections of pending patent applications.  Juristat’s patent analytics platform tracks the outcomes of such appeals.

Among many other useful tools, Juristat can aggregate appeal data for individual art units, USPC/CPC classes, and examiners.  The data presented below focuses on USPC 705, which covers the art units with the most Alice rejections.[xv] 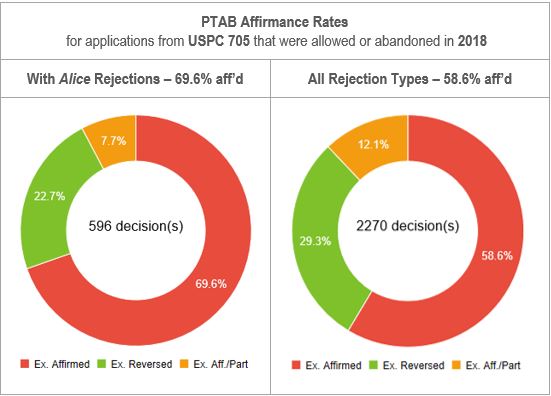 The comparison above is limited to patent applications with a disposition date in 2018, which means that the applications were allowed or abandoned this year.  Juristat provides data for previous years also, though such data is omitted from this comparison to avoid capturing any appeals arising from pre-Alice rejections.[xvi]

The Juristat data suggests that, in PTAB appeals as in Federal Circuit appeals, the affirmance rate for Alice rejections exceeds the overall affirmance rate.

The empirical data presented above belies the notion that it is impossibly difficult to predict the ultimate outcome of the Alice analysis.  Such predictions may be difficult in many cases and uncertain in some, but the same is true for many issues in patent law, such as obviousness and claim construction.  Whatever flaws the Alice analysis may suffer from, the data above regarding likelihood of affirmance does not show a clear basis for the widely held sense that Alice outcomes are especially unpredictable.

[iv] The authors thank Juristat for providing access to this data.

[viii] Further, most § 101 decisions at the Federal Circuit hold the patent claims at issue invalid.  At the PTAB, all of the § 101 decisions on appeal are rejections.  In both tribunals, the burden is on the party challenging the patent claim to show that the claim fails to satisfy § 101.  If an appellate judge truly believed that objectively correct decisions were impossible under § 101, the judge should arguably vote to reverse all § 101 rejections because no challenger could conceivably carry its burden.

[ix] The affirmance rate is derived from Gugliuzza and Lemley as follows:

[x] There is an ambiguity in Gugliuzza and Lemley’s data.  They report on page 783 of their article that the Federal Circuit found patents invalid under § 101 in 26 out of 33 precedential decisions.  In footnote 91 on the next page, they specify the affirmance rate for only 24 of these 26 decisions.  Thus, two decisions are unaccounted for.  The table provided here assumes that these two decisions were affirmed-in-part and reversed-in-part (i.e., “mixed”).  Such decisions are not counted toward the affirmance rate.

[xi] The data regarding the overall affirmance rate is taken from the following article: https://www.perkinscoie.com/images/content/1/8/v4/184121/Fed.-Circ.-s-2017-Patent-Decisions-A-Statistical-Analysis.pdf (Page 2).

[xv] The art units with the most Alice rejections are identified in the following article:  http://www.ipwatchdog.com/2015/12/14/the-most-likely-art-units-for-alice-rejections/.  Those art units correspond primarily to Class 705, as described here: https://www.uspto.gov/patents-application-process/classes-arranged-art-unit-art-units-2914-3715.

[xvi] Alice was decided in the middle of 2014 and PTAB appeals often take three or more years to fully resolve (from the time of the examiner’s appealed rejection to the notice of allowance following a successful appeal).  Including applications with disposition dates before 2018 would therefore capture appeals that arose from pre-Alice rejections.  Such applications may have faced Alice rejections later, but the rejections likely would have been issued after the appeal.  Thus, the Alice rejections would not have been before the PTAB and the PTAB’s decision could not shed any light on the predictability of the Alice analysis.