Before Newman, Dyk, and Chen.  Appeal from the Patent Trial and Appeal Board.

Summary: An injury-in-fact is required to establish Article III standing for judicial review of agency action, even if a statute permits such review.

Momenta Pharmaceuticals, Inc. (“Momenta”) requested inter partes review (“IPR”) of a patent owned by Bristol-Myers Squibb Company (“BMS”).  The patent covers a product that BMS markets under the brand name Orencia®.  At the time Momenta petitioned for IPR, it was reportedly attempting to develop a biosimilar counterpart to the Orencia® product.  The PTAB sustained patentability of the claims.  Momenta appealed to the Federal Circuit.

The Federal Circuit dismissed Momenta’s appeal for lack of standing and mootness.  BMS argued that Momenta lacked standing because its proposed product had failed clinical trials and had been withdrawn.  Momenta responded that it had not abandoned its intent to produce the biosimilar, and that it was injured by the IPR estoppel statute.  However, press releases and SEC filings from Momenta revealed that it had terminated its participation in the development program for the biosimilar.  The Federal Circuit held that because of this termination, Momenta had failed to show “an invasion of a legally protected interest” that was “actual or imminent, not conjectural or hypothetical.”  Further, IPR estoppel did not create an injury-in-fact because Momenta was no longer engaged in any activity that would give rise to a possible infringement suit.  Thus, Momenta lacked standing to appeal.  The Federal Circuit also determined that the appeal was moot because Momenta ceased the potential infringement and thus ended the potential for injury.  Therefore, the Federal Circuit dismissed the appeal. 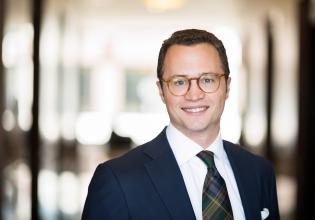 Jacob R. Rosenbaum
Jacob Rosenbaum assists clients in all aspects of trademark and copyright litigation and enforcement. He has extensive experience enforcing and defending...