Among the most significant changes made by the America Invents Act (AIA) are the provisions that permit a business to challenge a patent at the U.S. Patent and Trademark Office in litigation-type proceedings, but at a lower cost than normal patent litigation. Two proceedings appear promising based on early decisions, and a third proceeding will become increasingly available in the coming years.

IPR allows one to challenge any issued U.S. patent on the grounds that the claimed inventions are not new or would have been obvious. Because the petitioner must present its case at the outset, most petitions are supported by evidence from an expert witness. The Patent Office will institute IPR proceedings where the petitioner establishes a reasonable likelihood that it will prevail on at least one patent claim.

A business considering this tool should balance the pros and cons. An advantage may be a relatively quick proceeding. Most proceedings will conclude within about 18 months, which is faster than most patent litigation. While some discovery is allowed, the scope of discovery is narrower than litigation. An important consequence is estoppel. That is, a petitioner may not assert in a later proceeding any ground that was raised or reasonably could have been raised during IPR. In addition, not all courts are putting on hold co-pending litigation pending the outcome of IPR.

CBM allows challenges to the patentability of certain business method patents, such as those relating to methods for performing data processing or other operations used in administration or management of a financial product or service. Because the scope of patents available for this proceeding is narrower than IPR, there have been fewer CBM filings. Through May 2013, 28 petitions had been filed. The Patent Office has granted 12 of 15 petitions, for a current success rate of 80%.

CBM, like IPR, allows a party to challenge a patent for lacking novelty and being obvious. However, CBM is broader than IPR and allows challenges on any ground of patentability. To file a petition, the petitioner must have been sued for or threatened with infringement of a CBM patent.

The first CBM decision in SAP America, Inc. v. Versata Development Group, Inc. issued on June 11, 2013. Versata sued SAP for infringement of a patent for pricing products and services and won $345 million in damages. SAP challenged the patent under CBM, and the Patent Office found Versata’s patent to claim an unpatentable abstract idea. It remains to be seen how the Patent Office’s cancellation of Versata’s patent claims will affect the $345 million verdict.

PGR allows a party to challenge the validity of a patent during the nine-month period after the patent issues. This proceeding applies only to patents that are subject to the AIA’s first‑inventor-to-file provisions and have an effective filing date after March 16, 2013. Since no such patents have issued yet, there have not been any PGR filings or decisions.

PGR, like CBM, allows a party to challenge a patent on any ground of invalidity. PGR is broader than CBM in that any post-AIA patent can be challenged, rather than just covered business methods.  However, PGR is narrower in that the challenge window is open for only nine months. Given this relatively short window, businesses may want to consider closely monitoring new patents issued to competitors.

Nicholas Zovko is a partner at Knobbe Martens Olson & Bear LLP in Irvine. Nick represents clients in many aspects of intellectual property law, including patent litigation and inter partes review proceedings. He has a background in mechanical engineering and has prosecuted patent applications in a variety of technical areas. He has also enjoyed participating in several local pro bono activities, including volunteering for the Public Law Center and serving as a Deputy District Attorney for the Orange County District Attorney’s Office. Contact Nick at nicholas.zovko@knobbe.com or (949) 760-0404.

Steve Ruden is a partner at Knobbe Martens Olson & Bear LLP in Irvine.  Steve manages patent portfolios for clients in technical areas including computer software, physics, optics, finance, and medical devices.  Steve also represents clients in disputes before the U.S. Patent Office, including inter partes review and interference proceedings.  Before joining Knobbe Martens, Steve was an Associate Professor of Physics and Astronomy at the University of California, Irvine. Contact Steve at steven.ruden@knobbe.com or (949) 721-7609. 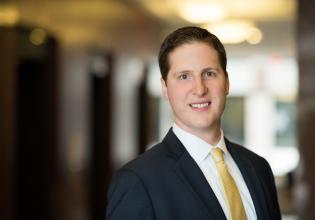