Nike filed a lawsuit against Puma on May 3, 2018 in the District Court of Massachusetts accusing Puma of infringing over 40 claims of seven utility patents.  The complaint asserts that Puma is using Nike’s Flyknit®, Air®, and cleat assembly in several of Puma’s footwear products.  Footwear generally includes two primary elements, (1) an “upper,” which covers the foot, and (2) a “sole” structure, which is the portion located below the upper, between the foot and the ground.  Nike’s Flyknit technology appears to relate to footwear uppers, whereas its Air technology and cleat assembly appear to relate to footwear sole structures.

Nike’s complaint states that its Flyknit technology was the result of years of research, design, and development in high strength fiber technology and advanced manufacturing techniques.  The results of Nike’s time and resources is the Flyknit upper: “a featherweight, form-fitting, and virtually seamless sock-like upper, scientifically tuned to provide areas of support, flexibility, and breathability where athletes need them most.”  The below photo shows Nike’s Flyknit upper detached from the sole structure. 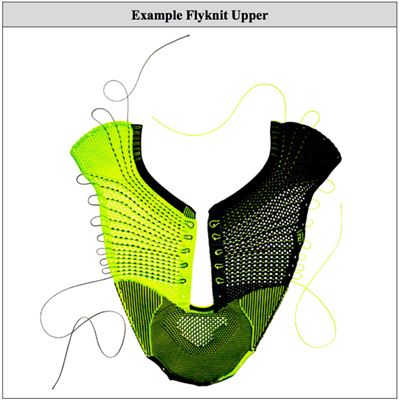 Nike introduced its first Flyknit footwear in 2012 and it was very successful, being used by both professional athletes and casual consumers.  Nike states that silver-medal winner Abel Kirui wore a pair of Flyknit shoes during his marathon in the 2012 London Olympics.  Nike claims that Puma first began using Nike’s Flyknit technology in October of 2015 with its IGNITE® Proknit shoe.

Nike claims it owns more than 300 issued utility patents directed to its Flyknit technology and that the following Puma shoes infringe some of these utility patents. 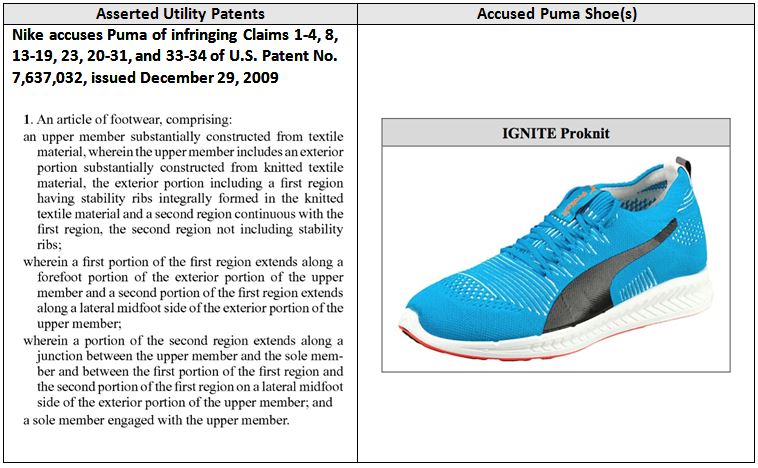 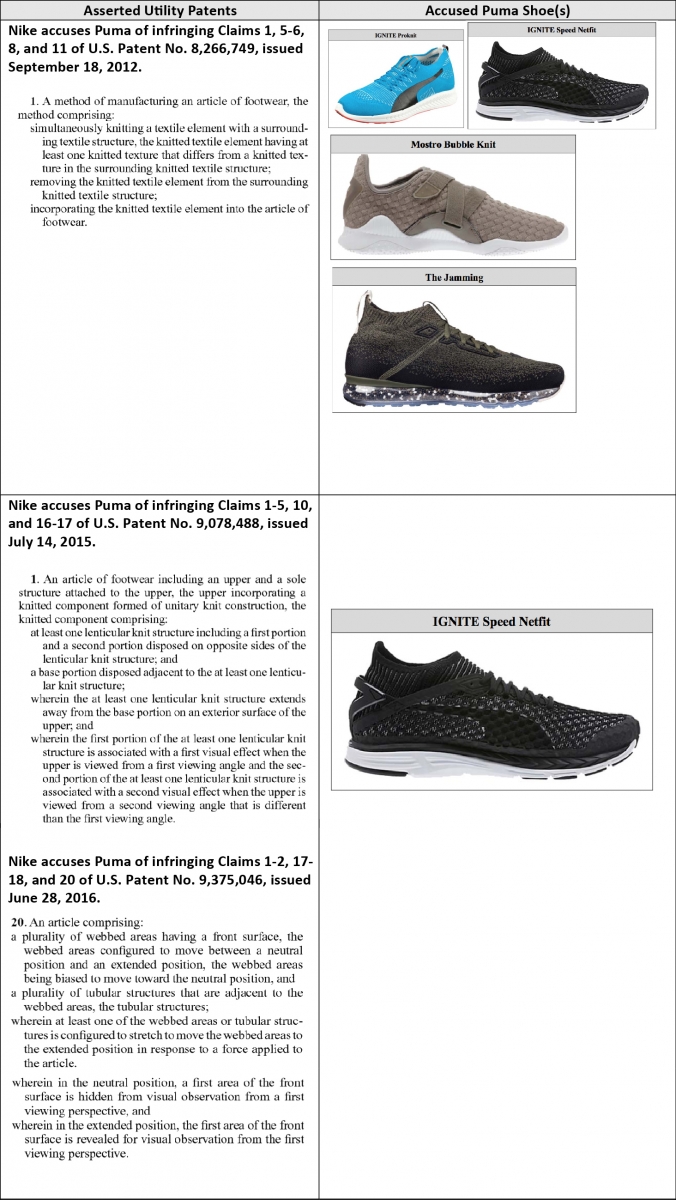 Nike states its Air technology relates to tough, but flexible bags filled with gas or fluid located in the sole structure of a shoe that absorbs shock but is much lighter than the conventional foam used by most footwear companies.  Nike’s Air technology “absorbs impact forces that would otherwise be exerted on the athlete’s muscles, joints and tendons, protecting the body against fatigue and stress. After impact, NIKE Air units return to their original shape, ready for the next impact force.”

Nike introduced its Air technology in 1987 and has continued to improve it by increasing the size of the bags, altering their position, improving flexibility, and experimenting with different gases and fluids.  The below photo shows the evolution of the Air technology over the years: 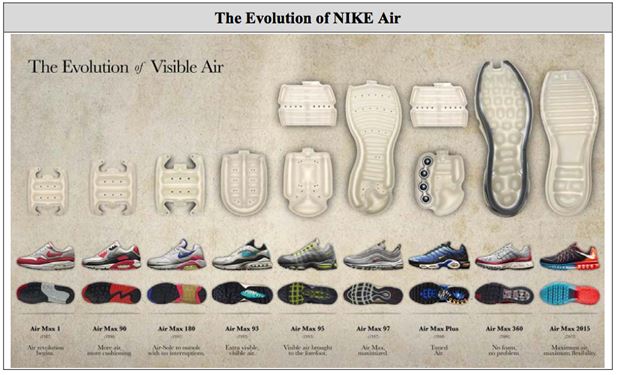 Nike claims to own more than 800 utility patents directed to its NIKE Air technology, including U.S. Patent No. 7,401,420.  Nike alleges that the following Puma shoe infringes this patent.

Nike’s Cleat technology was first introduced in 1971.  Nike claims that over the next 47 years, it “leveraged research, testing, and insight from the world’s best players—including Mia Hamm, Ronaldihno, Ronaldo, and Neymar—to redefine cleated footwear.”  Nike’s cleated footwear has morphed from “The Nike” in 1971 to todays footwear, such as the “Mercurial Superfly V” and the “Magista Opus II” pictured below. 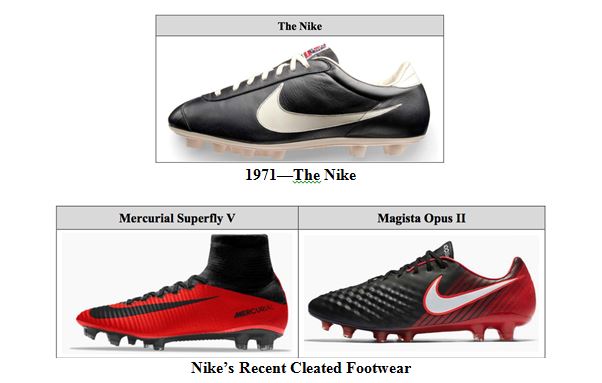 Nike claims to have more than 200 utility patents directed to its cleat assembly technologies, which include, among other things, “strategically placed cleats, support bars, and sections of varying stiffness to improve flexibility, foot control, balance, and propulsion; while also increasing comfort and reducing fatigue.” 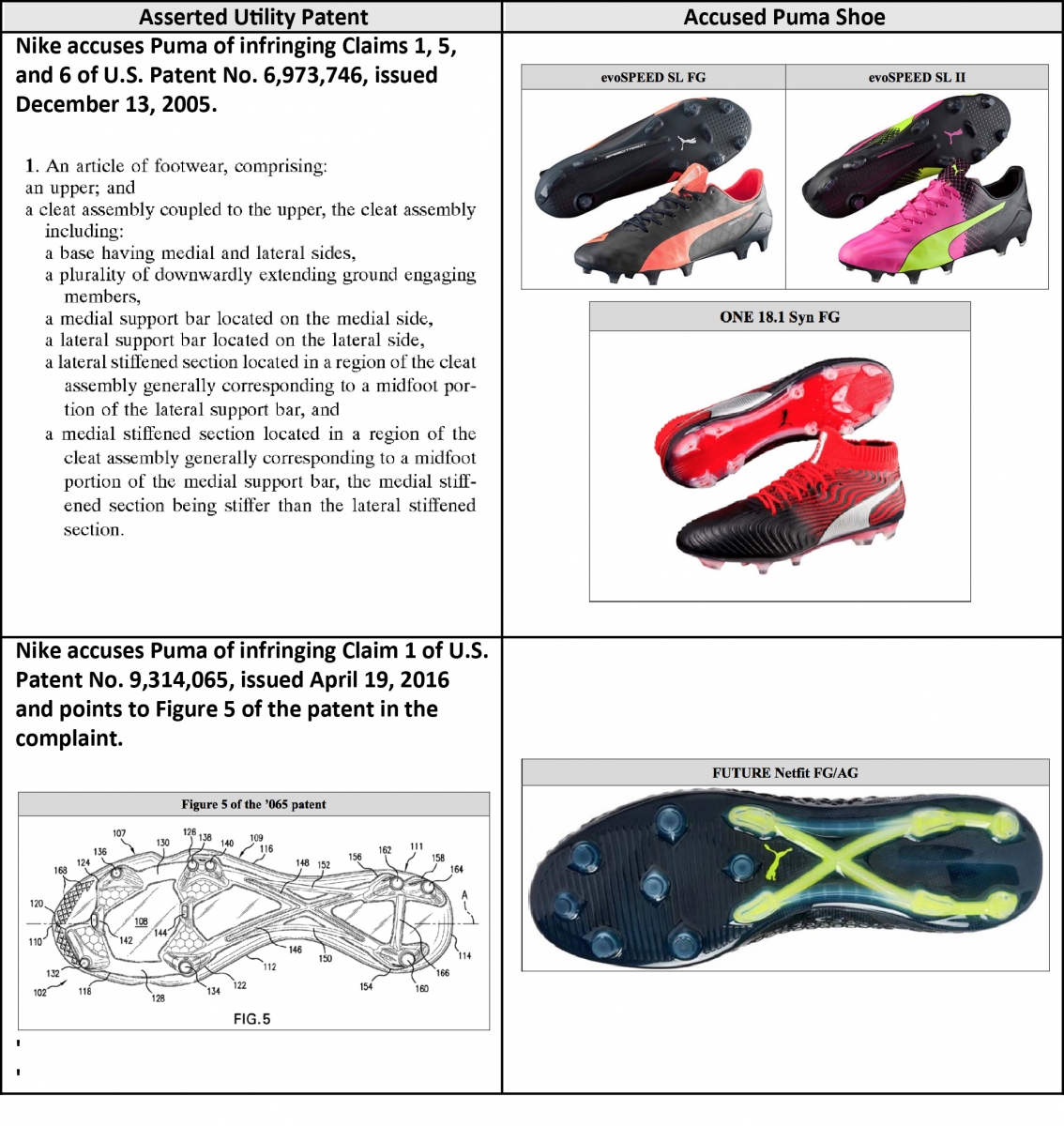 Nike seeks a permanent injunction, damages (including enhanced damages), and an award of attorneys’ fees against Puma.

Puma was granted an extension of time to answer Nike’s complaint. Puma’s Answer should be filed by June 29, 2018. 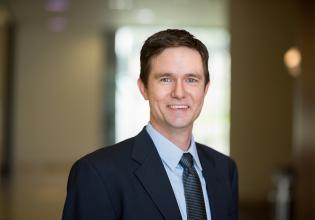