2017 Brings Issuance of New Design Patents for the Fashion Industry

It is well known among patent attorneys that design patents are an under-utilized form of protection in the fashion and beauty industry.  See, Nicole R. Townes and Robert Roby, Design Patents – The Often Forgotten, But Useful Protection for Accessories and a Designer’s Timeless and Staple Pieces.  Design patents should always be considered for timeless and iconic pieces or for pieces that form the building blocks of a designer’s collection.  They should also be considered for staple items, such as the shape of a perfume bottle, the sole of a shoe, or undergarments.

It is interesting to track the trend of design patents relating to the fashion industry. In January of 2017, the U.S. Patent and Trademark Office USPTO (“USPTO”) issued 2,572 new design patents.  Of those, a little over 170 (nearly 7%) were for fashion and beauty related products.  In comparison, in January of 2016, the USPTO issued 1,824 design patents.  Of those, about 140 (about 8%) were for fashion and beauty related products.  It is interesting to note that there was a much higher percentage of design patents issued for cosmetics, clothing, and shoes in 2017 than in 2016, but the percentage of issued design patents for jewelry and accessories was slightly lower. 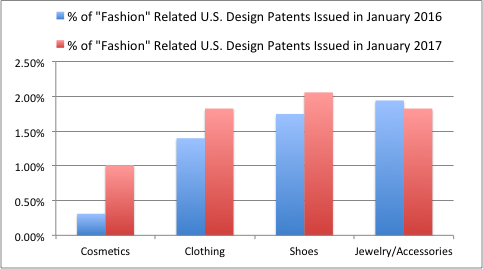 While this could be due to chance, it is possible that the cosmetics, clothing, and shoe industries are becoming more attuned to the benefits of design patents; a benefit of which jewelry and accessory makers have been well aware for years.  We predict that the number of design patents that will issue in the fashion and beauty industry will continue to increase as more companies and designers recognize the benefits that design patents add to their intellectual property portfolio.