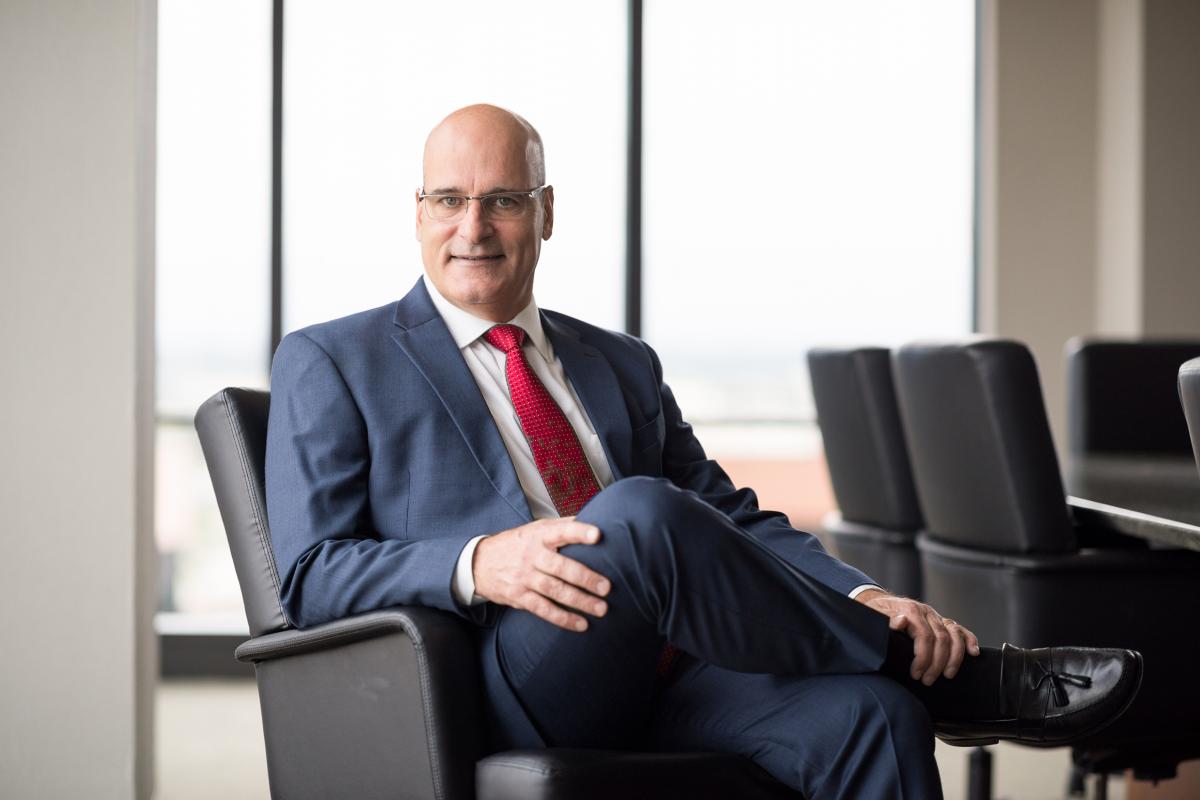 Mr. Re is a nationally recognized trial and appellate attorney, having handled high-stakes technology cases in federal courts throughout the country for over thirty years.

Mr. Re's trial success before juries has been extraordinary.  In two of the most successful patent cases presented to juries, Mr. Re led Knobbe Martens trial teams to help the firm’s longstanding client Masimo protect its ground-breaking patient-monitoring technology.  In the first trial, a Los Angeles jury awarded over $134 million against Masimo’s primary rival, Nellcor.  Mr. Re successfully persuaded the appellate court to affirm the award and to order the entry of a permanent injunction.  Those victories allowed Masimo to settle the case, garner hundreds of millions in damages and ongoing royalties, and go public.  In the second trial, Mr. Re and his colleagues asserted Masimo’s patents against patient-monitoring giant Philips before a Delaware jury.  That jury awarded Masimo over $466 million and rejected Philips infringement claims for $169 million. The verdict was featured in The National Law Journal's "Top Verdicts of 2014" as the top intellectual property verdict.  After the district court upheld the verdict, and set additional cases for trial, the parties settled the litigation in a blockbuster deal where Philips paid Masimo $300 million and agreed to a multi-year joint marketing and sales program in which Philips would integrate Masimo technologies in its patient monitors.

Mr. Re is also an experienced appellate advocate, often selected to argue appeals in cases handled by his colleagues and other law firms. He has argued dozens of appeals, the bulk of which were before the United States Court of Appeals of the Federal Circuit on behalf of both patent holders and accused infringers involving all kinds of technologies.

Mr. Re served as the President of the Federal Circuit Bar Association and as a member of the Federal Circuit’s Advisory Council from 2005 to 2014. Mr. Re has also written and spoken extensively on patent law and federal practice and procedure. Since 1990, Mr. Re has been authoring appellate briefs on behalf of the American Intellectual Property Law Association as amicus curiae before the Supreme Court of the United States and various appellate courts.

The National Law Journal has named Mr. Re one of the "100 Most Influential Lawyers in America" and as a "Winning Litigator." The Daily Journal has repeatedly named Mr. Re as one of the top "100 Leading Lawyers in California."  In 2015, Mr. Re was recognized as "MVP of the Year – Intellectual Property" by Law360. In 2004, The California Lawyer named Re "California Attorney of the Year." Mr. Re’s numerous awards and honors are detailed below.

Before joining the firm in 1987, Mr. Re served as a law clerk to the Honorable Howard T. Markey, the first Chief Judge of the United States Court of Appeals for the Federal Circuit. He became a partner of the firm in 1990.

Honorable Howard T. Markey, Chief Judge of the U.S. Court of Appeals for the Federal Circuit, 1985-1987

Applied Medical Resources Corp. v. Tyco Healthcare Group LP d/b/a Covidien, CV 11-01406, (C.D. Cal., July 11, 2014).
Represented medical-device maker and patent owner Applied Medical Resources, Corp. in an inventorship dispute filed by Covidien and Gaya Ltd. In a 130-page opinion, the district court ruled in Applied's favor on all claims, holding that no individuals associated with Gaya are inventors on any of the five Applied patents at issue. All litigation between the parties has since settled.

Smith & Nephew Inc. v. Rea and Synthes, 721 F.3d 1371 (Fed. Cir. 2013); Dupuy Synthes Prods., LLC v. Smith & Nephew, Inc., Appeal No. 2014-1136 (Jan. 13, 2015).
In two appeals before the Federal Circuit, Mr. Re represented Smith & Nephew, which was accused of infringing patents on orthopedic bone plates by subsidiaries of Johnson & Johnson. First, Mr. Re obtained a reversal of a Patent Office reexamination decision upholding the claims and the Federal Circuit held the claims were invalid for obviousness. In a second appeal, the Federal Circuit held that the Patent Office correctly held that the second patent was also invalid for obviousness. These appellate rulings rendered moot all pending litigation concerning these patents.

St. Jude Medical, Inc. v. Access Closure, Inc., 729 F.3d 1369 (Fed. Cir. 2013).
On appeal, represented medical-device maker after it lost a trial and faced a pending injunction for infringing a patent on devices for sealing vascular punctures. Obtained a reversal and a Federal Circuit ruling that patent was not protected by safe-harbor provision and thus was invalid for double patenting. Ruling led to $320 million sale of client to Cardinal Health in 2014.

Princeton Biochemicals, Inc. v. Beckman Coulter, Inc., 411 F.3d 1332 (Fed. Cir. 2005), aff’g 2004 WL 1398227 (D.N.J. 2004).
In jury trial and on appeal, represented laboratory-instrument maker, Beckman Coulter, accused of patent infringement. After verdict, obtained ruling that Beckman had not infringed and that the patent was invalid for obviousness and because Beckman was the first inventor. The appellate court affirmed the invalidity ruling.

Lewis v. Moore et al., No. 15-13979 (11th Cir. Mar. 30, 2018).
Representing Masimo, obtained affirmance of summary judgment of no liability in product-liability and negligence case. Participants in a nationwide study alleged that customized pulse oximeters used in double blind nationwide study were defective because of the manner in which they reported oxygen saturation and that they increased their risk of harm. The Eleventh Circuit held that the plaintiffs had no evidence of any actual injury sufficient to warrant a trial and affirmed summary judgment.

In re Sotera Wireless, Inc. (Bankr. S.D. Cal. July 18, 2017).
Representing Masimo in a bench trial, obtained a judgment that two former employees willfully misappropriated various trade secrets when they stole thousands of documents from Masimo upon leaving the company to join a competitor. As a result, the court enjoined the debtor from using any of the misappropriated materials or the employees in the product design process.

Ruhe v. Masimo Corp., 14 F.Supp.3d 1342 (C.D. Cal., April 3, 2014).
Representing Masimo, persuaded a district court to vacate an arbitration award in a constructive wrongful termination action because of the arbitrator’s “evident partiality.” The award included over $5,000,000 in punitive damages. On appeal, the Ninth Circuit reinstated the award.

Superior Court for the State of California v. ISD Corp., AAA arbitration (2014).
Representing software vendor at trial and defeated claim brought by the state courts of California that they could terminate client’s supply of case management software despite various termination provisions. Pending client’s claim for attorney fees as prevailing party.

United States ex rel. Ruhe v. Masimo Corp., 977 F.Supp. 2d 981 (C.D. Cal. 2013).
Representing Masimo, obtained summary judgment against a group of former employees who alleged that Masimo caused false claims to the government in connection with its devices which noninvasively measure a patient’s hemoglobin. The district court rejected relators claims that the devices, known as Pronto, were worthless and thus any governmental payment for reimbursement was a false claim. The Ninth Circuit affirmed the judgment.

Yorkey v. Diab, 601 F.3d 1279 and 605 F.3d 1297 (Fed. Cir. 2010) and Appeal No. 2011-1360 (Fed. Cir. 2012).
In three appeals from two patent interferences against Covidien subsidiary Nellcor, represented medical-device maker Masimo and established that it was the first inventor of various algorithms for pulse oximeters to measure through motion. 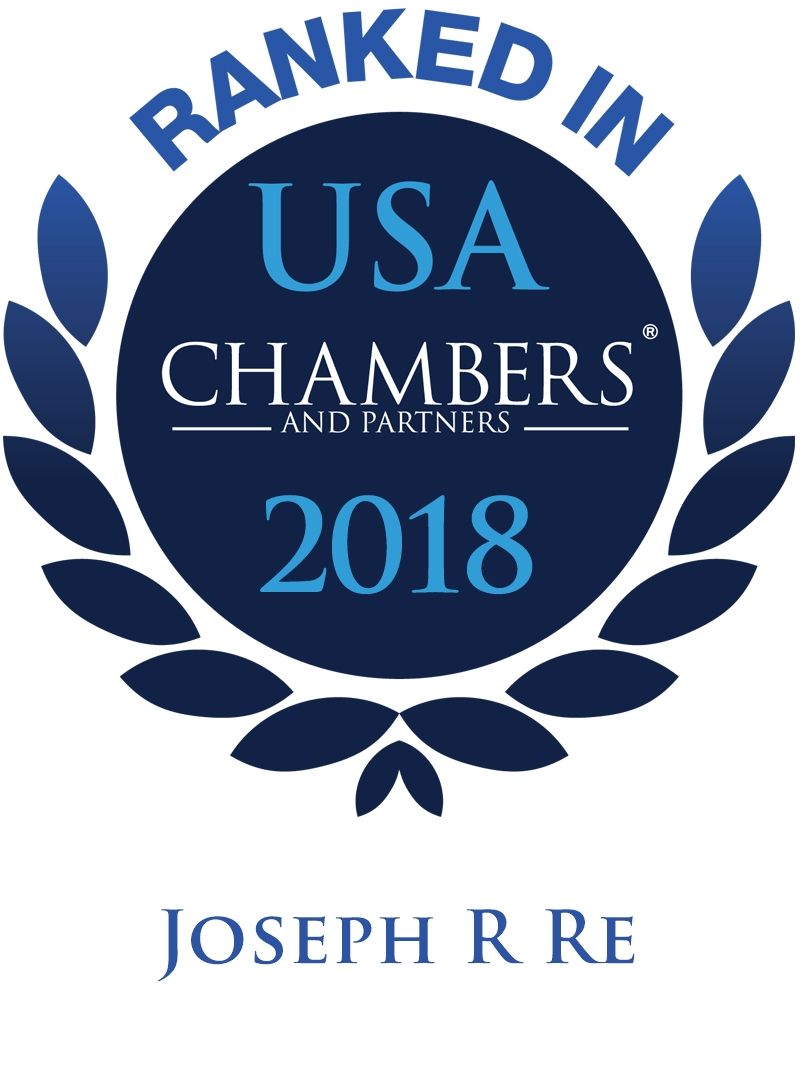 Mr. Re has received multiple awards and has been honored in both national and international forums for his legal accomplishments:

United States Court of Appeals for the Federal Circuit

Quoted in, "Industry Commenters Say Minerva Ruling is a Win for Employee Mobility," by IPWatchdog (June 2021)

Quoted in, "What To Watch As Justices Eye Restriction On Patent Attacks," by Law 360 (April 2021)

"Litigator of the Week: Joseph Re of Knobbe Martens," The American Lawyer Litigation Daily (October 2014)

Chapter 186, "Court of Appeals for the Federal Circuit" in 8 West's Federal Forms - National Courts (West Pub. 2002), co-author, with annual pocket part supplements which are up to date.

Chapter 5, “The Answer and Other Responsive Filings” in Patent Litigation Strategies Handbook (2nd ed. BNA Books 2006), co-author, with annual pocket part supplements which are up to date.

“Litigating a Patent-Related Dispute in Court While the USPTO is Reexamining or Reviewing the Same Patent,” presented at the Annual Spring Meeting of the AIPLA in Philadelphia, Pennsylvania (May 15, 2014).

“Patent Prosecution Through The Eyes of a Patent Litigator,” presented to the Washington State Patent Law Association in Seattle, Washington (September 19, 2012).

“Disqualification of Law Firms In Patent Cases,” presented at the Annual Meeting of the AIPLA in Washington D.C. (October 21, 2011).

Advocating Patent Cases With Emotion, presented at the Annual Spring Meeting of the AIPLA in New York, New York, (May 7, 2010).

“In Defense of Proving Patent Invalidity by Clear and Convincing Evidence,” presented at the Annual Spring Meeting of the AIPLA in Houston, Texas (May 15, 2008).