Before Moore, Reyna, and Chen.  Appeal from the Patent Trial and Appeal Board.

Summary: During vacancies of Director and Deputy Director of the U.S. Patent and Trademark Office, the Commissioner of Patents may exercise the Director’s authority to decide rehearing of inter partes review decisions without violating the Appointments Clause of the Constitution.

Smith & Nephew, Inc. and ArthroCare Corp. petitioned for inter partes review of Arthrex, Inc.’s patent, arguing that certain claims of the patent are anticipated by prior art.  The Board instituted inter partes review and ultimately found in favor of the petitioners.  Arthrex appealed, arguing in part that the Board lacked constitutional authority to issue final decisions.  Specifically, Arthrex contended that Administrative Patent Judges (“APJs”) are not nominated by the President and confirmed by the Senate as the Appointments Clause of the Constitution requires for principal officers.  The Federal Circuit agreed, holding that the appropriate remedy was to (1) sever the statutory limitations on the removal of APJs and (2) remand for rehearing by a new panel of APJs.  Though the Supreme Court agreed that APJs could not issue a final decision binding the Executive Branch, it vacated and remanded the matter.  In doing so, the Court ordered an alternative remedy; that is, to (1) exempt the Director of the U.S. Patent and Trademark Office from 35 U.S.C. § 6(c), which precludes anyone but the Board from granting rehearing of a Board decision, and (2) remand the case to the Acting Director to determine whether to rehear the case.  On remand, Arthrex sought rehearing by the Director.  However, as both the offices of the Director and Deputy Director were vacant, the Commissioner for Patents was charged with addressing Arthrex’s request, pursuant to an agency order.  The Commissioner denied rehearing and ordered that the Board’s decision is final.  Arthrex appealed.

Arthrex also averred that the Federal Vacancies Reform Act (“FVRA”) prevented the Commissioner from ruling on the rehearing request.  The Federal Circuit rejected this argument as well, as the FVRA only limits who may temporarily perform the non-delegable duties of a PAS officer; the Director’s authority to decide rehearing requests is a delegable one. 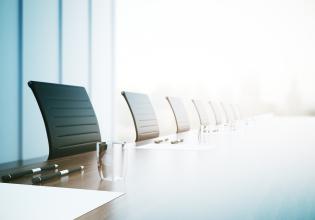 Alexander G. Trimes
Alexander Trimes is an associate in the firm’s New York office. Alex received his J.D. from UCLA School of Law, where he served as co-editor in chief of the...