In July 2018, Citroën, the French car manufacturer, unveiled glasses that aid in alleviating motion sickness.  The “Seetoën” glasses, developed by Boarding Ring, purports to eliminate motion sickness symptoms within about 10 minutes of putting them on.  According to Boarding Ring, the Boarding Ring technology includes four rings filled with blue liquid. 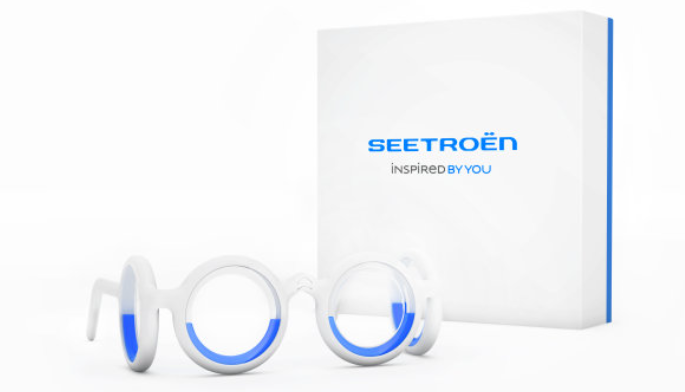 Currently, common remedies for motion sickness include focusing your eyes on the horizon, choosing your seat wisely to minimize motion (e.g., front or driver’s seat in a car, center of a boat, over the wings on a plane), avoiding alcohol and fatty foods, and taking medications such as Dramamine. But these remedies are not necessarily a complete fix. According to the Smithsonian, “some examples include a pair of blinders to block out visual information, a head mounted projection device meant to make visual information line up with sensory information, and shutter glasses that open and close rapidly, meant to prevent the visual slippage associated with motion sickness.”

As explained by Autoevolution, the lens-less glasses “create an artificial horizon line in the front and sides, which allows the resynchronization of sight and inner-ear, and thus ‘cures’ motion sickness.  Put them on and look at a fixed object, such as tablet or phone or book, and you should be able to remove them after 10 minutes[.] [Afterwards,] your motion sickness symptoms [will be] all gone.” The glasses use a concept that is similar as looking at the horizon when experiencing motion sickness at sea.  The horizon provides a stable reference point for our brains to focus on, thus alleviating the confusion that other senses create when sending confusing information to our brains. Alleviating motion sickness can be performed by putting on the Seetoën glasses as soon as symptoms start to occur. The Seetroëns can be worn over prescription lenses. Once symptoms disappear, one can simply remove the glasses and enjoy the rest of their trip. 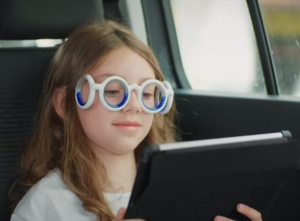 However, there are critics who remain skeptical of the effectiveness of the glasses. Thomas Stoffregan, a professor of kinesiology at the University of Minnesota states that “[p]eople have been trying to use an artificial horizon in the context of motion sickness for several decades, at least since the 1970s …It’s never worked. My question to this company is ‘what’s different about your virtual horizon?’” In response, Boarding Ring’s CEO Antoine Jeannin says the Boarding Glasses are unique because they bring an artificial horizon to the peripheral vision—that’s why the glasses have four lenses—unlike other products, which only engage the central vision.

The glasses were invented by the father of Antoine Jeannin, Hubert Jeannin. According to the Smithsonian, “Hubert Jeannin patented his innovation in 2004 (the ’237 Patent) and tested the Boarding Glasses prototypes with the French navy, and, although the exact results are confidential, his son says it was extremely successful—some 95 percent of users found the glasses helpful within 10 minutes. Father and son now run the company together, with father handling innovation and son handling business.” According to Autoblog.com, early reviews of the spectacles come from boating magazines, and the specs received a special mention at the marine-focused 2013 DAME Awards.” Eventually, Citroën’s called upon Parisian design studio 5-5 to redesign the glasses with a fresh, simple, and ergonomic style.”