On March 31, 2017, Forever 21 was sued by Puma over its “Fenty” line of shoes.  The “Fenty” label has become popular, in part, due to the influence of music artist, Rihanna as the label’s brand ambassador.  In its complaint, Puma claims that it keeps the volume of the “Fenty” label products small and limits sales to increase the label’s desirability.  The “Fenty” shoes include the “Creeper” sneaker, the “Fur Slide” sandal, and the “Bow Slide” sandal.  Puma’s complaint includes allegations of patent infringement, trade dress infringement, and, interestingly, copyright infringement.

Specifically, Puma claims that Forever 21 infringes its design patent of the “Creeper” shoe shown below.  As discussed in a previous post, design patents are an increasingly important form of protection for a company’s timeless and staple pieces.

Additionally, Puma claims that Defendant, Forever 21 infringes its (unregistered) trade dress in all three of its “Fenty” shoes: the “Creeper,” the “Fur Slide,” and the “Bow Slide” shown below.  For more information on trade dress protection see our previous post, These Boots Are Made For Walkin’: Trade Dress and the Distinctive Look of a Boot Sole. 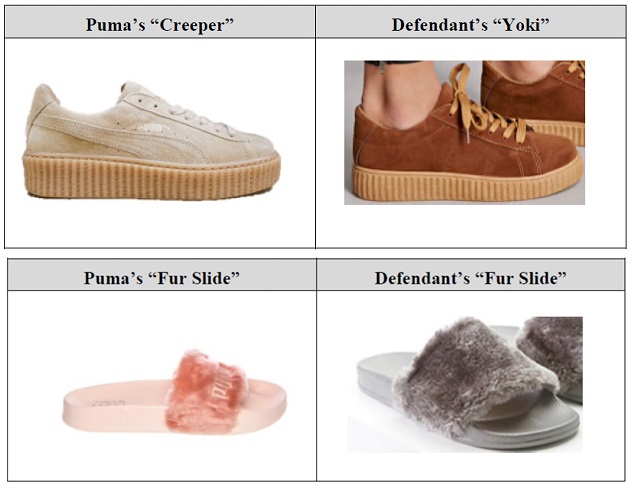 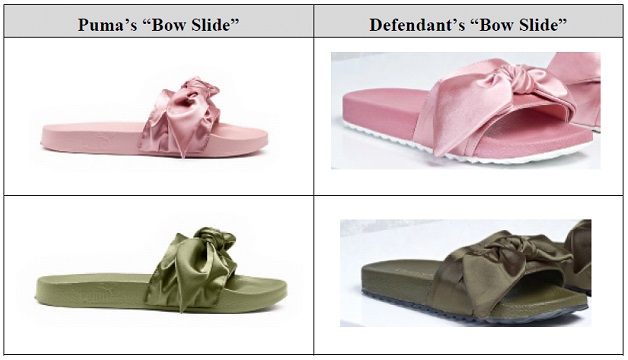 What is interesting about this new case filed by Puma, is that it appears to be the first case to test the boundaries of the recent Star Athletica v. Varsity Brands Supreme Court decision discussed in previous posts, here and here.  Citing the recently issued Supreme Court opinion, Puma contends that each of the Fenty Copyrights (1) can be perceived as a two- or three dimensional  work of art separate from the Fenty Shoes and (2) would qualify as a protectable pictorial, graphic, or sculptural work—either on its own or fixed in some other tangible medium of expression.  Puma claims that Forever 21 infringes its copyrights in the shoes.

To qualify for copyright protection, the creative elements of a shoe must be “conceptually separable” from the functional or “useful” elements.  In Star Athletic v. Varsity Brands, the Supreme Court ruled that a design on a useful article, such as a shoe, can be copyrightable if it “(1) can be perceived as a two- or three-dimensional work of art separate from the useful article and (2) would qualify as a protectable pictorial, graphic, or sculptural work—either on its own or fixed in some other tangible medium of expression—if it were imagined separately from the useful article into which it is incorporated” (“the Star test”).

Puma is “treading” into new territory in the wake of the Supreme Court’s decision on separability issued just last week, as lower courts have not yet applied the new Star test.  Are bows and fur straps what the Supreme Court justices had in mind when they imagined copyrightable works of art separable from a useful article?

Additionally, just because something is “eligible” for copyright protection based on its separability, does not mean that it is per se copyrightable.  In order for Puma to prevail on its claims for copyright infringement, it has to prove that the designs are both separable and copyrightable.  The Supreme Court in Star noted that its decision made “no opinion on whether these works are sufficiently original to qualify for copyright protection” or “on whether any other prerequisite of a valid copyright has been satisfied”.  For example, a copyright only extends to “original works of authorship.”  Thus, Puma has to establish that the “wide plush fur strap extending to the base of the sandal” is an original design and that the original design is separable from the sandal in order to obtain copyright protection for the “Fur Slide” sandal.  Forever 21 can try to show that a satin bow or plush fur strap lack originality.  Forever 21 can also try to establish that such designs are ubiquitous in the industry and predate Puma, such that they are the equivalent of unprotectable “scenes-a-faire.”

Whether Puma’s case makes small baby steps in interpreting the Supreme Court’s new Star test, or blazes a new trail in asserting copyright infringement, remains to be seen.  We will keep you posted.